Ensuring the sustainability of the Flinders region

The Detailed Business Case has been successfully completed. 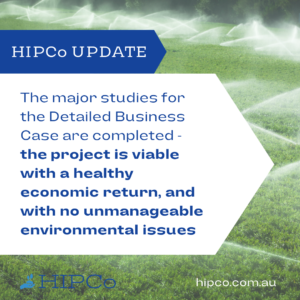 The Hughenden Irrigation Project is seeking to improve the sustainability in the Flinders region. Like many other parts of rural and regional Australia, North West of Queensland has suffered through years of extreme weather events, declining populations, and loss of services.

The Hughenden Irrigation Project Detailed Business Case (DBC) details the opportunity to build an instream storage system of 161,000 ML on Saego Station, 45km north-west of Hughenden, to support an irrigation area scheme servicing 11,000 ha with 4,800 ha being actively irrigated for high value horticulture crops and fodder crops for the local grazing industry. The new scheme will transform Hughenden and the Flinders Shire communities into a diverse, future-proofed and resilient agricultural and economic powerhouse in north Queensland.

The proposed scheme will generate $776.6 million in benefits (net present value) over the life of the project and over 1,900 ongoing new agricultural jobs, at full production. It will also create 2,500 jobs over the two-to-three-year construction period, comprised of almost 600 people directly employed in construction living in worker accommodation and about 1,900 indirect jobs to support project delivery.

The major studies for the DBC have now been completed and are demonstrating the project is viable, with a healthy economic return, and with no unmanageable environmental issues. Using the types of measures that are required of a DBC, an economic Benefit Cost Ratio (BCR) for the project has found to be greater than one, meaning that the benefits of the project outweigh its costs.

The project is of strategic importance for the region and aligns very well with the strategic direction of Regional Development Australia to enhance growth and development of Australia’s regions. The Business Case is compelling for the Australian and Queensland governments, locals, water customers and other stakeholders.